10 years old Tai was fall 5miters from the tree, lesion to left side of the body, T7 ribs, pelvic and temporally lost consciousness. Tai damaged L3-4 dislocation-subluxation, thrown javelin paraplegia in 1949, and at home accidence in bathroom, lesion to C7-T1 fracture and subluxation Quadriplegia in 1987, right finger between index and thump interosseous muscle atrophied.

That is Tai learning Western medicine and Acupuncture try to treating his body less disable, live and walk independently, now Tai is 87 still practicing acupuncture for Tai and SCI patients.

Following are Tai from 1979 to 2019 in Australia treating Quadriplegia and paraplegia SCI cases study.

SCI is a complex damage to the nervous system, essentially, is injured to the spine, spinal cord, upper and lower motor neurons, spinal nerve, in which lost of skin sensation, muscles movement, and internal organs-such as lost urination, bowel movement and sexuality function.

Acupuncture is one form of medical treatment for SCI. The methodology is applying neuro-science, and needle techniques achieved the result.

The differentiation in this study:

The major points of difference in this approach is: the utilization of different strengths of acupuncture needle application which incorporates three effects: Receptors stimulation (strong medium and gentle), cellular repair (blood and QI), and utilization of the acupuncture needle-sharp, which performs like a scalpel to release and stretch the scar tissue and muscles following the initial needle insertion point has been made.

The second point of difference is the utilization of the acupuncture needle by multiple needle insertion within the body, which produces nerve impulses as a strong wave vibration, which pass through sensory and motor gates and the neurotransmitter that transmits from one neuron to other neuron, which rebuilding reflex components.

Repeat needling into the points can induce inflammation and wounding of the tissue to recruit macrophages into the region and to induce local inflammation cellular for SCI wound healing.

This treatment protocol is offered as 3 sessions/week lasting one hour, over 3 to 6 years post-injury.

Conclusions: Our approach is based on maximizing the patients’ own repair processes by maximizing bone marrow derived macrophage recruitment; stimulation of local populations of stem cells and utilization of the acupuncture needle to stimulate key neurological networks above and below the spinal cord lesion. With the aim of maintaining/providing neurological input on neural networks that would otherwise receive limited stimulation. This case study report demonstrates that western medicine combined with acupuncture methodology significantly enhances functional recovery beyond current available rehabilitation methodology and physiotherapy in SCI.

Ps: in the pass thirty years, Tai had treating SCI—8 cases Quadriplegia and 7 cases Paraplegia Patients, at that time more involved clinical practice requirement, in this book, the last discussion of the preview cases, will pay more attention on analysis the treatment progress.

Acupuncture refers to the insertion of a fine filiform needle into key point on the body to treat illness. Points are located in the tissues of the body’s wall. The needle is inserted into body wall tissues through different channels largely are via the nervous system, activated the body potential and strength to heal the illness. Dependent on where the illnesses required, ACU point is located, the practitioner is inserted the needle target on the illnesses and the correlated point in which is located into the skin, into the connective tissues, muscles or joints, even deep into the periosteum of the bone. Only in the rare cases would a skilled practitioner target an internal organ. In most acupuncture practice is through reflexes mechanism achieves the result, not of necessity having to needling into the organ directly. Traditionally, the sharp tip of needle does not carry any medication or herbs.

ACU clinical diagnosis of SCI utilizes the American Spinal Injury Association standard based on neurological examination, MRI and/or CT scans, as well as the hospital diagnosis at discharge. 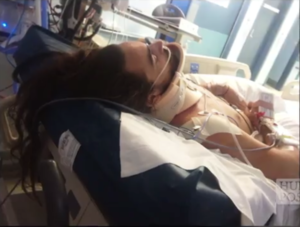 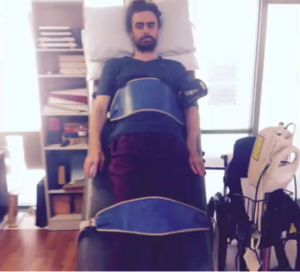 overstretched flexion and extension of the head and neck

cause lesion to the medulla and brainstem neural pathway. 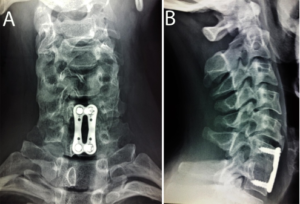 After SCI, Ben had neck operation, the crusted attempt stability of the C4, 5, and C6, neck position. 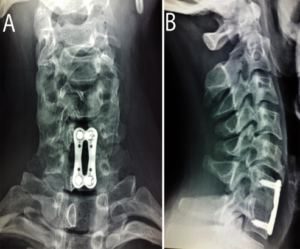 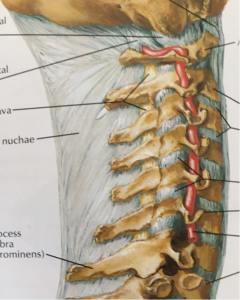 Post operation scars on the neck, the scars are not situated on the centre, more on left site cross the sternocleidomastoid muscle, and shows the following side clavicular bone rising. The scars causing neck and head imbalance of the cervical vertebrae movement, especially, after removal of the screw, show the body symptoms, spasticity, sleep difficulty to keep the head position and weakling up headache. Ben after operation asking the surgeon how that going? The answered was ‘see three months after operation’, after operation; Ben still sit on wheelchair, had neck pain and difficulty in sleep.

Those four pictures show Ben had acute and chronic damaged on his vertebrae and pelvic, picture-D, initial T1 to T4 vertebrae fracture and subluxation, from T4 to T12 spine curvature.

Ben interest with acupuncture, that was no another choice, he was frightening the needle, especially, needling to the neck and head, and here is the essential lesion part.

Ben confident with Tai; that is a hope, and Tai demonstration his paralysed legs moving—reflex activity.

In one year, ACU treatment Ben can stand, two three years after, Ben can walk with walking frame hundred meters, but Ben does not feel ACU treatment had improvement, because he feels when he is walking just like flying on the air, that mean: he not necessary is walking. Lucky enough Ben keep coming for ACU treatment and Tai do what he can. Ben believed that one day soon he can walk independently.

The immediate treatment is released the urgent symptoms:

Musculature contraction on the back of the scapular, stiffness of the neck, hands and legs spasticity…

The essential treatment focus on:

Right-side shoulder and back of spine muscles strong contraction, and left-side muscles flatten. ACU treatment reinforcements the left muscles and reduction of the right muscles, and avoid doing strenuous-exercises, of the back and chest, prevention of spine curvature.

Reticular formation is a set of interconnected nuclei that are located throughout the brainstem, which is a neural pathway connected brainstem to motor central nuclei, and down to spinal cord motor neurons.

Vestibulospinal tract assist the reticular formation to maintain muscle tone and balance the body’s posture, so when patient standing and walking needs to keep the head up and eyes looking forward in a straight position.

Treatment on the neck, there is a scar tissues on the throat at Adam level, needling the points surrounding on the scar and into the central of scar.

Point below the mandibular ST6 ST7

The metal in cervical vertebrae is for stability the neck movement, the location is on C5-6-7 in which is bass of the neck, together with lesion to C8-T1, the neck movement is affected to the neck and spinal cord, particularly, Ben in deep sleep at night and a strong leg muscles contraction when Ben wake up at early morning, only after removal the metal, and continue ACU treatment slowly no more leg trembling.

Actually, the results of the breathing exercises are more than external musculature reaction in which included increases the internal organ’s function, in particular, the neurovascular pathway, which is involved on diaphragm, neck, head, the lungs and the heart region blood circulations and the nervous system function. The breathing also actively mobile and massage the internal organs—liver, spleen, stomach, intestines and kidney. The body musculature moves the body part and naturally and powerfully move the body lymphatic and blood circulations.

Spinal cord and spinal nerves, especially, the lower thoracic and lumber vertebrae are directly involved the lower extremities skin sensation and muscles movement Without muscle movement the tendon on the ankle and legs will lack of blood supplies may loss function or atrophy. The lymphatic and blood circulation will stasis or loss; and the ankle and legs may swell. The old ageing process is starts from the legs—Chinese version. If does not move the legs will sit on wheelchair the real-life value is gone.

There are four sets of chest meridian points can be selected CV, KI, ST, and SP.

Sternum and costal joint: CV and Kidney points on the chest.

The chronic inflammation in trochanter and hamstring muscles attached to the tuberculosis and back of the knee tendons, must release inflammation rapidly, and excitation the muscles got the strength for stand. The point is palpated where the muscles are tightening and needling releases it.

The thigh muscles are tone can lift the thigh up to the pelvic, need needling to the lateral side of the body, and asking patient used abdominal and thigh muscles move the leg included knee and ankle joints. In this stage, patient can train walk with walking frame. Few months after the leg’s muscles getting more strength can walk confidently and try to walk with crutches, that still need well training and avoid accident, if the sensation reaches to the foot and legs muscles more strength and coordinated movement. Slowly, the participant can walk with walking stick.

Ben is happy to the whole ACU treatment progresses in which take times achieve the results. When you have severed accidence, you need times and patience face to the truth, ACU treatment slowly get better both patient and practitioner need paid good effort together achieve the better out-come.

Ben shows  right hand spasticity, and right leg spasticity, and right shoulder muscles severed contraction, that is not border to Ben, in which though that is regular pattern in SCI, for sure, that is severed lesion to the SCI. Ben expecting in one year can walk again, so he done lots of strenuous exercise attempt quickly recover, unfortunately, he made more damage to his body, such as both shoulder muscles; one side contraction and another side flatten and pull thorax to one site, spine curvature.

One year after ACU treatment Ben can Stand, two years after ACU treatment Ben can walk with walking frame, he said his treatment no improvement; because he felt when he walked with walking frame, just like flying on the air. That took another three more years ACU treatment, the leg spasticity slowly reduces and control. Only when spasticity is controlled, Ben can walk better, in which recovery and balance the spinal cord, motor central nuclei and motor neurons innervated into the leg muscles. The cause of the spasticity not necessary only in one point or one section of the body, in Ben case involve centre motor pathway, spine curvature, L5 and S1, hip, knee and ankle joints included Plantar tendon, the termination of Ben and family support is the best achievement for Ben in SCI.